- October 16, 2021
BUILDERS DEVOTIONAL DATE: SUNDAY, OCTOBER 17, 2021 TOPIC: EXPRESSING THE KINGDOM SEED TEXT: Est 2:4 _Then let the girl who pleases the king be queen instead of Vashti_ LESSON The greatest of the values one should treasure is that of pleasing the king. This was the criterion that brought Esther into limelight. Whenever a man makes pleasing God his priority, it leads to a cascade of events and actions that lead to the manifestation of the hidden glory. However, It is beyond the scope of this article to have an exhaustive study but we shall see some of such cascade of events that follow. 1.Purity: God is Holy and anyone who seeks to please him keeps himself. The women sought were all virgins (kept life, preserved substance not wasted life that the king sought.) Even if you got born with a bad past, you still need to be filled again! You must understand and walk in the kingdom principle for restoration else you will not manifest the due glory. Only men with preserved substance manifest the
Post a Comment
Read more

- October 16, 2021
BUILDERS DEVOTIONAL DATE: SATURDAY, OCTOBER 16, 2021 TOPIC: KINGDOM SEED AND KINGDOM GLORY TEXT: Est 6:12-14(NIV)  _Afterward Mordecai returned to the king's gate. But Haman rushed home, with his head covered in grief,  and told Zeresh his wife and all his friends everything that had happened to him. His advisers and his wife Zeresh said to him, "Since Mordecai, before whom your downfall has started, is of Jewish origin, you cannot stand against him — you will surely come to ruin!"_ LESSONS The seed of the kingdom in us has the power to uproot, unseat, destroy the seed of corruption, shame, death or poverty. The mystery of the kingdom power is in the seed !   Gen 3:15(TLB)  _“From now on you and the woman will be enemies, as will your offspring and hers. You will strike his heel, but he will crush your head."_  The seed was in the grave for three days but finally he conquered death ( Psalm 16:10) The verdict of Haman was spoken by an unbelieving wife and counselors.
Post a Comment
Read more

BUILDERS DEVOTIONAL - REVELATION OF HIS GLORY (3)

- October 16, 2021
BUILDERS DEVOTIONAL DATE: FRIDAY, OCTOBER 15, 2021 TOPIC: REVELATION OF HIS GLORY (3) TEXT: 1 Peter 1:23 _For you have been born again, not of perishable seed, but of imperishable, through the living and enduring word of God._ LESSON We have a spiritual seed in us that grows till it produces fruits of glory. The kingdom of God in us is likened to a seed that when it fully grows it produces place for birds of the earth to nest in. Lack of the understanding and recognition of that seed leads to men being stranded in the journey of life. Matt 13:31-32 _He told them another parable: "The kingdom of heaven is like a mustard seed, which a man took and planted in his field. 32 Though it is the smallest of all your seeds, yet when it grows, it is the largest of garden plants and becomes a tree, so that the birds of the air come and perch in its branches."_ From the above text, glory is a product of growth which leads to the expression of kingdom potentials you are loaded with. Growth
Post a Comment
Read more

- October 16, 2021
BUILDERS DEVOTIONAL DATE: THURSDAY, OCTOBER 14,2021 TOPIC: REIGNING WITH CHRIST Text: 1 Cor 14:1 _Follow the way of love and eagerly desire spiritual gifts, especially the gift of prophecy_ LESSON There are  major equipments bequeathed the saints for reigning in this earth realm.  A Christian that is not equipped this way will be unproductive in service and representing the Kingdom. He will operate more naturally than spiritually. Since all the treasures are in the spiritual realm, we should know that the tools of the gifts of the Spirits are part of the conversion mechanism.  Joseph was ahead in his days by fanning the gifts of interpreting dreams which was the deposit of God in him, Gen 41:12” We told the dreams to a young Hebrew fellow there who was a slave of the captain of the guard, and he told us what our dreams meant” TLB. Likewise  Daniel and many more others. While the world celebrates talents, the Kingdom citizens display God through their giftings. The later is superior to
Post a Comment
Read more

- October 12, 2021
BUILDERS DEVOTIONAL DATE: TUESDAY, OCTOBER 12,2021 TOPIC: REVELATION 0F HIS GLORY( 1) TEXT: John 17:22-23 (NIV) _I have given them the glory that you gave me, that they may be one as we are one_ LESSONS The most important thing to note in our theme text is that Christ gave us the same glory that was given to him by the father. So, if we want to partake of the glory of the son, we have to study his glory. Knowing him is knowing ourselves in him. Who he is is who we are on this earth. If  someone says: I will give you my car, it is different from: I will give you a car. You can see the picture of the car he is using and say, this is the car that I will soon be driving. But if he says  ‘’a car”, you don’t know which car yet. We need to know the glory he walked in as a son, that is the same glory that he has predestined us into. John 17:22(TLB) _"I have given them the glory you gave me-the glorious unity of being one, as we are"_ The secret of partaking of this glory is to know t
Post a Comment
Read more

- October 12, 2021
BUILDERS DEVOTIONAL DATE: MONDAY, OCTOBER 11,2021 TOPIC: ATTAINING AUTHORITY IN KINGDOM PRAYERS TEXT: 1Cor 13:11 _When I was a child, I made use of a child´s language, I had a child´s feelings and a child´s thoughts now that I am a man, I have put away the things of a child._ LESSON We were redeemed from slavery to sonship in Christ. However, it is only by growth that we can lay claim of the inheritance of sons(Gal 4:1-4). Any believer who refuses to grow will groan. A Christian who refuses to grow will surely pay for his negligence. A baby Christian will be carried for a while, however, the day he needs more than milk, that carriage expires! When your need is beyond your stage, you are due for another stage else you beg! This is why many beg. They overstayed at an expired stage! A child is dependent and does not drive cars. He must be driven by someone. You cannot be in charge as a baby but you must be under. The mandate in the kingdom makes a demand for growth. God cannot put a baby
Post a Comment
Read more 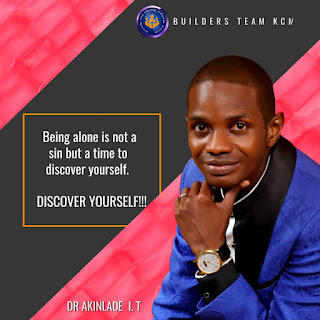 BUILDERS DEVOTIONAL DATE: SUNDAY, OCTOBER 10, 2021 TOPIC: KINGDOM PURPOSE AND  PRAYERS TEXT: Act 4:31 _And when their prayer was ended, the place where they were was violently moved, and they all became full of the Holy Spirit, preaching the word of God without fear_ LESSON They prayed for one purpose which was the only one Christ came for and the power of God came down. The burden of Christ was the central point of their prayers. Miracles were needed to advance that mandate of Christ and when it was asked in alignment of purpose, God granted it. Principle of purpose is key in praying in this Kingdom. What is good may be bad when out of purpose.The purpose of God is to make us witnesses. The motive behind all you need and pray for should be to make you an effective witness at the end.The cars God wants to give you is to make you a sample of His glory. The beautiful family you need is to reproduce God's counsel generationally.  That wealth is also to spread the gospel. Anything not
Post a Comment
Read more
More posts